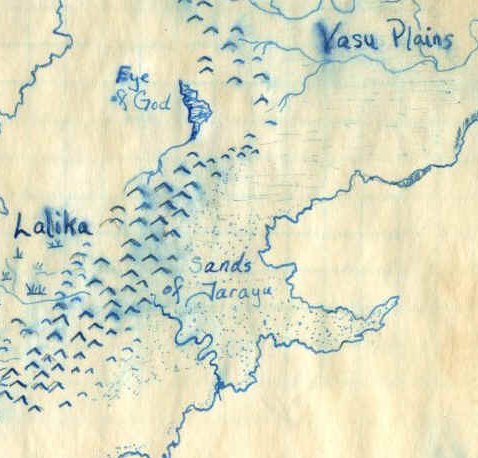 Jarayu was named for the first of the great desert dragons.  After claiming a region no one else wanted, he took the desert elves under his wings, taught them basic magics, and treated them as valuable resources to be developed.  When humans moved into the area from the plains to the north, he offered them sanctuary but only under the condition they maintain a peaceful relationship with his elves.  Bhanu, the current lord of Jarayu, is his direct descendent.

The elves call themselves the Lanikamali’i – which means Sky Children.  They are nomadic, living in small family groups of 20-30 adults plus children.  Every few years the families will gather, exchange news, and part ways again, often in new groupings.  They will raid the Vasu plains and the mountains to supplement the goods they can trade for.  A few individuals have settled in the small fishing villages that humans founded along the coast.  The Lanikamali’i have adapted completely to their desert life.  They are tall, for elves, and very thin.  They have pale skin and hair that matches the desert sands, and sky blue eyes.  This has led some humans to believe, erroneously, that the desert elves are part desert dragon.   The Lanikamali’i have developed strong, specialized magic.  They craft magical boots and clothes that augment their natural abilities, making them nearly impossible to detect, track, or capture.  They use non-magical versions of their cloaks and boots as trade goods.  On rare occasion, one may find magical versions for sale in the bazaars of Kerani and Nishad.

The greatest threat to the Lanikamali’i are the giant sand snakes.  These snakes are also adapted perfectly to their environment.  They are large enough to consume elves and humans, and will do so if given the opportunity.  However, they usually prey on other snakes.  All of Jarayu’s snakes – which are legless, wingless dragon-kin – have shovel-shaped snouts that let them burrow into sand and loose soil.  The smallest of them prey on insects, scorpions, lizards, and other small desert creatures.  Some are active hunters while others are ambush predators.  Many of them, including the giants, use a sticky secretion to build and maintain tunnels and dens under the sand.  The skins of these snakes are waterproof and very durable, and are used by the Lanikamali’i in lieu of leather.