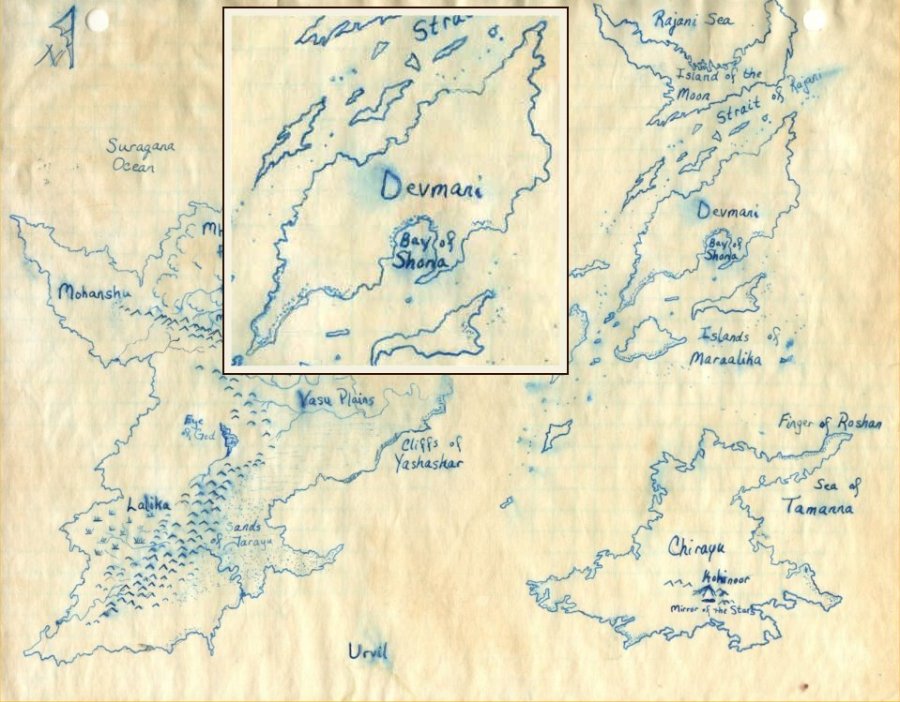 The island of Devmani is about 500 miles wide, and a little over 1500 miles tip to tip.  It was the core of a much larger land mass that included the Island of the Moon, the Rajani Straits, and the Maraalikan archipelago.  Devmani lies in temperate waters, rich in fish and other sea life.  The interior of the island remains heavily forested and is the personal domain of Divyagana, who rules Devmani.

The forest is a combination of hard- and soft-wood, transitioning to evergreens in the north.  There are many nut and fruit bearing trees, and a wide variety of animals – all the diversity of a healthy temperate forest.  A select few clans of elves are allowed to live in the forest as caretakers, and they trade the gifts of the forest for the bounty of the sea collected by the coastal people.

Most of the population of Devmani is human.  Most of the elves are either seafaring, or nomadic traders that wander from port to port in brightly colored caravans.  Very few dwarves or gnomes live on Devmani since the island doesn’t have the mountains or hills to accommodate them.  The dwarves and gnomes who do live here have adapted to life above ground and have brought a distinct architectural style to Devmani buildings.

The Bay of Shona, in the south, provides a sheltered, deep water harbor.  Devmani’s largest port, a city called Nila Jal (Blue Water) located on the north coast of the bay, harbors the island’s ship yards.  The shipwright families are closely tied, by oath and marriage, to the Grove-masters who plant, tend, and harvest the trees used to build the ships.

Devmani is a thriving place, watched over by a mostly benevolent, mostly uninvolved ruler.  The Devmani people have developed a robust culture and an economy based on trading the unique materials and goods the island provides.  Divyagana largely ignores their activities as long as they don’t threaten the health of the island’s ecosystem.