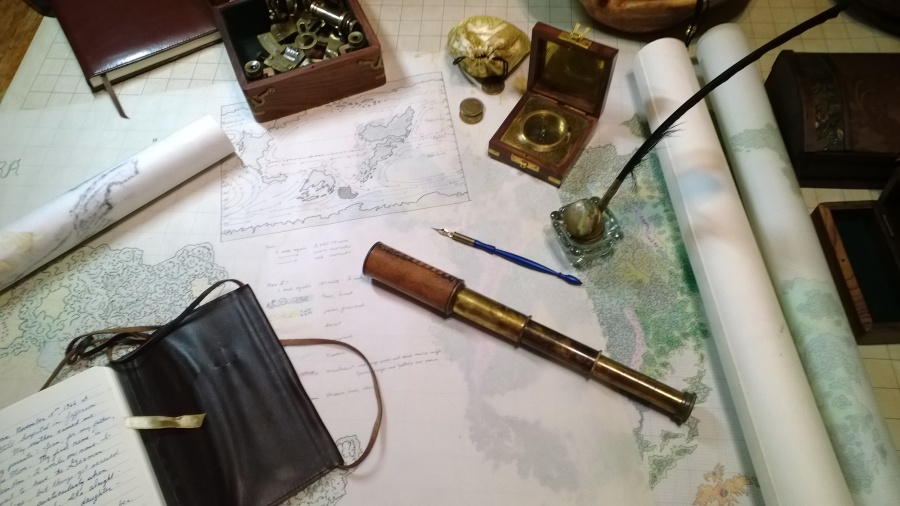 Tamzy has black curling hair and bright green eyes.  She’s a plump little woman, having spent most of her life in relative comfort.  She enjoys dressing up in flowing skirts with lace and frills but, after the fire incident, never wears such clothing while she’s working.  Most days you’ll find her in a simple, short-sleeved tunic and practical trousers with many pockets.

Tamzy grew up in Pebsworth Borough, a day’s ride north and a bit west of Koenigsburg.  The Pebsworth clan folk are known for their curly-haired goats and the fine products they make.  Tamzy preferred to wander collecting plants, insects, and shellfish and discovering their different properties.  She would add strange lichens to the soap vat to see what they would do.  Once, the entire clan sported lavender skin for a week.  They now use that preparation as a yarn dye.

The year Tamzy came of age her family naturally expected her to find a mate and settle down to normal goat herding.  Tamzy did find love but, as with everything else she did, it was in an unexpected place.

That summer, just before solstice, a group of players came to Pebsworth.  They juggled and danced, sang and told stories, and entertained the Borough with tales of derring-do.  Tamzy spent every moment she could with a lithe, handsome halfling man.  They would talk late into the night, watching the star wheel overhead.  They would do other things late into the night as well.   After the solstice celebration, as the troupe was preparing to leave, Tamzy announced that she was going with him… them.

He took her aside and explained, as gently as he could, that she was as much a solstice entertainment for him as the troupe was for the borough.  After the initial shock wore off, Tamzy slapped him in the face, punched him in the gut, stomped him on the foot, and then ran off.  From her hiding place she listened as their wagons rolled away.

She didn’t mope for very long.  She was not a moping kind of person.  Although she had misread her lover’s intentions, his stories had still sparked a fire in her heart.  She was already packed – she might as well leave.  The next morning she bid farewell to her parents, and her aunties and uncles, and her cousins, and her nanna and gramps.  Then it was dinner time, so they had an impromptu going-away celebration for her.  Afraid it would start all over again, she rose before dawn the next day and slipped out of the borough.

Tamzy spent a year in Koenigsburg under the tutelage of an old mage.  She never did take to the magic (except for a few cantrips and a wild magic missile) but she learned everything he had to teach about alchemy, and taught him a trick or two besides.  With her knowledge hanging from her belt in bottles, she joined a mercenary company.  She soon learned that the adventuring life was NOT for her.  It was dirty (far dirtier that herding goats), and uncomfortable, and dangerous.  When the group returned to Koenigsburg she said farewell, bought a small shop with her share of the spoils, and settled down to a life of supplying adventurers with potions and salves.  And alchemical experimentation of course.