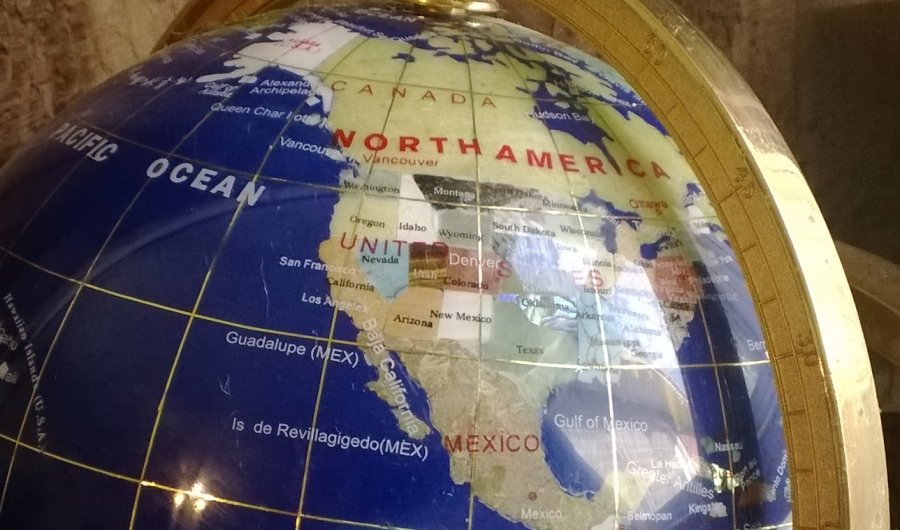 The West Coast of North America is separated from the rest of the continent by the mountains in the north and east and by the Sonoran desert in the south and southeast.  A single trade route, called the Eastway, runs through the Sierra Nevada mountains and across the Sonora.  Though some goods come overland from as far away as the East Coast, most goods are from the desert southwest: Arizona, Nevada, Texas, and Oklahoma.  Once every year or so, a ship from Hawaii will drop anchor (in Frisco harbor), carrying the most precious items: jade, opal, amber, pearls, oils and spices, silk and paper, all from the Far East. Trade with South America has not yet been reestablished.

The West Coast is divided into small city-states, all of which subsist mainly on fish.  The largest are: Astoria (in the northwestern tip of Oregon), Frisco, and Ellay in the south.  Frisco, with its bay, is by far the largest and most prosperous, and most ships dock there.  Astoria has access to the far north, whale ivory and oil, pumice and other volcanic rock.  But Ellay controls the only route to the interior of the North American continent, where these goods can be traded.  Only the distance and small, fierce tribal villages between them keep Frisco from warring with Ellay for control of the Eastway.

Ellay was originally named New Los Angeles.  People, being people, shortened it to New L.A.  Then the “New” was dropped.  Over time, people forgot they were using initials, and L. A. became Ellay.

The city is located on the coast near the site of San Juan Capistrano about 60 miles from old Los Angeles, or 2 days’ ride.  15-20 outlying villages pay taxes to Ellay’s mayoral coffers, usually in the form of foodstuffs, woven baskets and grass mats, and other goods.  Ellay works mostly on the barter system and has no issued currency, but it is happy to accept other folks’ coins.  The city and its tributary villages support a permanent population of approximately 45,000 people, with another 1,000 in transient merchants and their guards and mercenaries.  Shops and trades of all kinds thrive as do traveler’s inns and taverns.  Market Street has booths and stalls for rent where villagers and foreign merchants can sell their goods, sun-up to sun-down seven days a week.  Perhaps the most popular tavern in town is The Drunken Dagger, located on the eastern side of town near the gate to the Eastway.

The Mayor controls the city and surrounding area as a monarch.  In fact, “Mayor” is not an elected position but an inherited title, passed from father to son.  The Mayor’s word is law and applies to everyone but the Mayor himself.  His closest advisor and assistant is the Commissioner, who is appointed by the Mayor.  The Commissioner oversees, and is responsible for, the 10-20 Judges that preside in the Mayor’s courts.  The Commissioner appoints a Deputy Commissioner, commonly just called the Deputy, who oversees and is responsible for the City Guardsmen.  Though the Commissioner and Deputy are appointed, traditionally the appointees come from the same small pool of families who have served Ellay’s Mayor for generations.  “Judge” is also a hereditary title and position, but the Guardsmen are considered tradesmen, and any able-bodied young man may apprentice to them.

Ellay’s government is strictly patriarchal, with titles, positions and property passing from father to son.  There is an elaborate and strict system for inheritance in cases where there are no surviving sons.  Only if a man has no male relatives will his wife inherit any property, and she may never inherit titles or positions.  Furthermore, women are allowed to work in a limited number of trades: farming/husbandry, weaving/seamstress work, trading (merchant), inn keeping or hostelry, baking/cooking, and hospice-work.  They may not own, carry, or use any weapon other than a small dagger.

Politics – In all animals there is a great deal of competition for social power.  With our own species, we call this competition “Politics.”  The Mayor of Ellay may believe he has absolute power to rule, but his government is not one big happy family.  Like all governments it contains factions, and each faction has its own agenda.  Among the civil servants are those who believe they would be better suited for the position of Commissioner, and of course they all try to catch the Mayor’s attention and prove themselves.  There are others who compete for the position of Deputy Commissioner.  And just because the Judges inherit their titles doesn’t mean they don’t suffer the same kinds of political machinations.  On the contrary, their lives are sometimes more hazardous for their enemies live within their own homes.  The merchants and tradesmen suffer from the same ambitions as politicians, and they contend with each over the best stalls on Market Street and the best locations for their businesses.  All this competition means somebody wins and somebody loses, and it’s not uncommon for the losers to become very disgruntled or even violent.  Rumors abound of assassination attempts among rivals.  Some of the rumors are true, just as some of the assassination attempts succeed.

Although social posturing is just as vital to the small villages, they cannot afford the kind of cutthroat activities that larger towns indulge in.  The villages are just too vulnerable to outside attach, so generally there are strict rules governing village hierarchy, and also strict rules for challenging that hierarchy in an attempt to better one’s position.  These are, most often, contests that pit one person against another. Yearly and semi-annual tournaments are common.

Ellay’s city Guard is patterned after 20th century American police. Ellay is divided into 12 Districts: 11 in the city and 1 for the surrounding area. The Guards for each District are commanded by a Captain, who is responsible for the training, housing, and assignment of the Guards in the District.  Each District is divided into a number of Precincts, commanded by a lieutenant. The Guards themselves are assigned to Patrol Units – called either “Patrol” or “Unit” – commanded by a Sergeant.  Guards at the Patrol level are called either “Guardsman” or simply “Guard.”

The four most important Districts are:

Paper is a rare and precious commodity, and therefore isn’t used for something as mundane as money.  Money takes the form of metal, wood, ivory or shell coins.  Ellay doesn’t mint its own coin, as Frisco and Mormon do, nevertheless there are many coins floating about the city.  Most coins are copper; called a penny, the copper coin is the one used for day to day purchases.  Nickel coins are called nickels and are usually worth 50 pennies.  A “quarter” is still 25 pennies, but a dollar is a silver coin and worth about 500 pennies, if the coin is pure silver.  Gold coins are called dublins (a corruption of doubloon), are worth 100 or so dollars, and are extremely rare.  Only the richest of the rich have dublins, and only the richest of the rich, or Nations, would trade using dublins.  Wooden coins are called chips, and are generally used between tradesmen to represent labor or goods received.  The rare ivory coins are called scrim (from the term scrimshaw – an ivory carving) and equal to silver coins in value.  Rare or particularly beautiful shells, especially from the conch and abalone families, are polished and used as coins called marks.  They range in value, just as metal coins do, from 1 to 100 pennies depending on the rarity and beauty of the shell.

Ancient coins – 20th century pennies and such – are worth 100 times a normal coin – i.e. an Ancient penny would be worth 100 pennies, an Ancient nickel worth 100 nickels, and an Ancient silver dollar worth 100 dollars – even though the silver content is almost nil.

Most folks make less than five dollars in a year, and rarely see 100 pennies at a time.

Some normal costs in Ellay: ((note: the tavern owners and merchantmen are free to change this without warning))

The most famous tavern in Ellay, the Drunken Dagger has a reputation for being the roughest, rowdiest, most profitable tavern, too.  It’s a single-story building that shares a wall with the two-story Dagger’s Inn.  The tavern is owned and operated by Deacon Yumi, and the inn is run by his wife, Rosa.  Both rule their worlds with iron fists, dealing fairly but firmly with customers and employees alike.  It is a good place to work if you work well and hard, and the best place to rest after a long caravan.