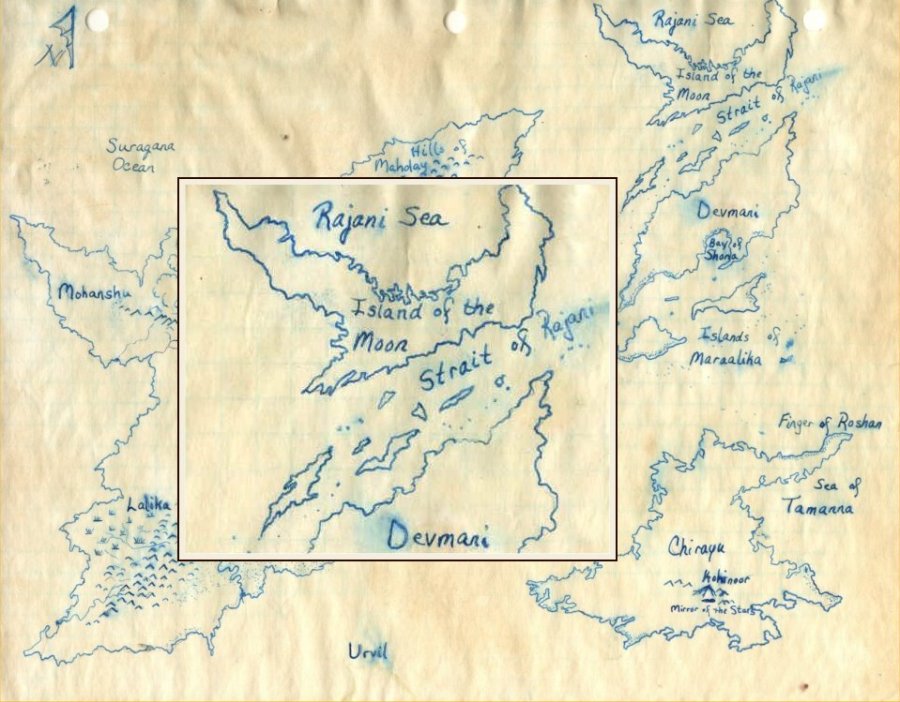 The Rajani Sea, the Island of the Moon, and the Straits of Rajani are known, collectively, as Rajani.

The Rajani Sea, which is choked by ice in the winter, is home to a variety of wildlife including seals, sea lions, and snow drakes that use the north shores of the Island as breeding grounds.  Kelp grows profusely throughout the Rajani waters, and houses fish, clams, crabs, turtles, and many different sea drakes.

The Island of the Moon is known locally as Candrashika.  It is populated primarily by elves and gnomes.  There are a few small communities of humans on the south shore. There are no dwarves.

The elves, who are as tribal and nomadic as elves in other places, have developed a symbiotic relationship with one of the local drake species.  The elves and drakes live together, hunt together, and protect each other.  The elves by no means think of the drakes as pets, or even working animals.  They are draconic members of the family, loved and cherished as such.

The gnomes have adapted in their own way.  Unable to burrow into hills, they have learned instead to build their own hills.  Using rock, bones, and leather (and packed snow in the winter) they build bungalows and lodges and covered walkways connecting them.  They are more cooperative than gnomes elsewhere and though the men still vie for social dominance they are far less likely to become violent.  The women aren’t as sheltered, either.  They are closer to being equal partners with their men, often hunting and fishing with them.  They have more social power as well.  No marriage is allowed without the approval of the clan’s Grandmothers.  The Grandmothers keep extensive records on clan lineages, and ensure the health and proper breeding of the clans.  Each year at the summer solstice, the clans gather for the Summer Fair.  They exchange goods and news, and men have the chance to find wives.

In the islands of the Straits, humans once more become dominant.  The Straits are populated by hearty fisher folk and sailors.  They harvest the bounty of the seas, including the most beautiful pearls, and trade these for cloth, rope, wood, and other necessities.  They aren’t generally pirates, but they are not averse to raiding the coast of Devmani or taking a southern ship or two.  If harvests have been poor, or the storms severe, the Rajani Islanders are more likely to raid or capture ships.  However, they have to balance this activity against the likelihood of the dragons becoming involved.  Therefore, raiding is kept to a minimum lest Divyagana takes notice and challenges Shitaritu Rani, the Winter Queen, ruler of Rajani.